Note from Nora: Encountering the Unknowable Mystery We Call God 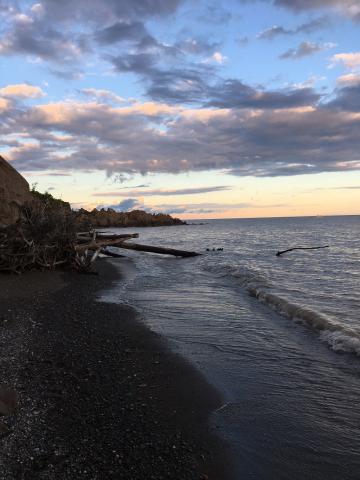 Walking the dogs early on a windy morning, I look up and see about twenty-five large birds gliding in big circles without moving their wings as they ride gracefully on the air currents. Such a beautiful sight.

On the ground, turkey vultures are far from beautiful. They are big, ungainly, almost menacing looking birds. Even less attractive when they are observed on the ground feasting on roadkill. You would never recognize them as the ones who soar so gracefully high in the air.

Appearances aside, turkey vultures play a beautiful role in the world. They get their sustenance by feasting on the carcasses of animals that have already died. Their food is what would otherwise go to waste. They are true environmentalists.

We are in the midst of Creation Time in our liturgical calendar, a time to both celebrate the natural world that God has given us, and to speak out about the way that humankind is damaging our precious planet.

When I was growing up, my parents and many of their closest friends were members of both The United Church of Canada and the local Field Naturalist Club. Their faith was interwoven with the way that they lived and participated in the world. I was fortunate to have that example growing up. I grew up thinking it was normal… and actually somewhat boring.

Now I wish it was normal. I no longer think it is boring.

It is a common thing in our church, and I think in society generally, that many of us feel close to God when we are out in the natural world. We find moments of peace, of power, of beauty, awe, and even of challenge… All of these, and more, give us a sense of the unknowable mystery that we call God.

Some see the natural disasters that seem to occur so frequently today—raging fires, melting glaciers, hurricanes and typhoons—as acts of God to punish the world for our sinful ways. I see them as evidence of how we have betrayed the sacred gifts we have been given by God. Evidence of God’s pain at the state of our world.

As I write I am sitting on my front porch, which has been my office, as well as our dining table, all summer. As the days get cooler, I sometimes have to move inside these days. As fall drifts towards winter, the porch will be left vacant for a few months.

From this vantage point, I feel the breeze off Lake Erie and hear the sound of the waves on the shore down below, and I remember these words from Psalm 24:

"The earth is the Lord’s, and everything in it, the world, and all who live in it; for he founded it on the seas and established it on the waters."

Blessings,
Nora
Nora Sanders is General Secretary of The United Church of Canada.

This message was originally sent to subscribers to the General Secretary's letter, "Note from Nora."