Bradford United Church believes it is doing God’s work by becoming a hub for the arts. 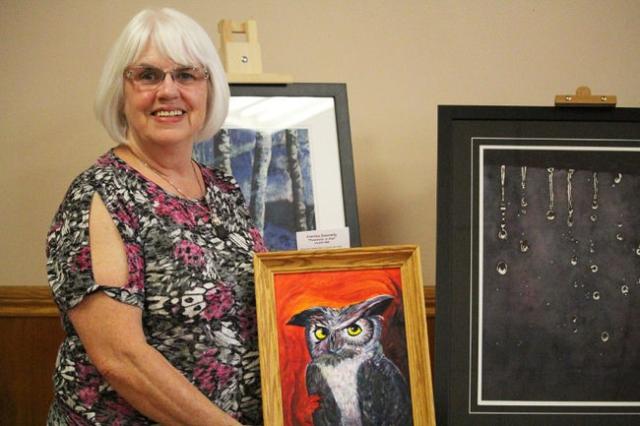 Corrine Donnelly, am artist who lives in the Bradford area, holds up a painting that was on display in the Bradford Arts Centre.
Credit: Courtesy of Bradford United Church
Published On: December 8, 2016

Art has always played an important part in churches throughout the ages, ranging from simple sculptures to Michelangelo’s Creation of Adam on the ceiling of the Sistine Chapel.

The Rev. Jim Keenan of Bradford United Church in Bradford, Ontario, recognizes the important intersections between art and religion. “A healthy arts community is integral to the spiritual and overall health of the community and the overall well-being of its residents,” he says.

Since there is a shortage of performance and exhibition spaces in Bradford, Keenan spearheaded a drive to turn the sanctuary and hall of his church into the “Bradford Arts Centre.” With its curved wooden pews and old plaster, he said the sanctuary of the church offers superb acoustics, and seating for up to 200 people.

Churches across the land may want to look at Bradford United, he said, to see how a small congregation “can rediscover themselves, and engage the surrounding community.” The centre’s success also shows how a small church can leverage money and guidance from Embracing the Spirit and the Edge network, to revitalize their own ministries.

After a committee of congregation members decided that the best way to reach out to the community was through art, they approached Embracing the Spirit for funding. A $500 grant allowed the church to set up a community roundtable, where area artists discussed what an art centres in Bradford should offer. In order to gauge the wider public’s interest in the arts, a grant of $1,500 from Embracing the Spirit was used to plan and run three art-related events, with the marketing for those events branding the church as the Bradford Arts Centre.

More than 75 people came out to a Beer & Bach night at the centre, including Bradford’s mayor. The other two events were a Carrot Fest and a play reading.

“All the events were very successful,” said Keenan, noting that the events attracted new faces to the church. “Theologically, we started to interact with people we otherwise would not be connected to,” he said.

Bradford’s mayor was so impressed by what he saw that he encouraged the Arts Centre to apply for a grant that is given to small community groups. The Centre will now receive approximately $3,000 in January 2017, with more municipal support to come. A baby grand piano was also donated privately.

After the success of these three arts events, the congregation voted unanimously to expand the performance stage in the sanctuary. Future plans call for improvements to the sound, lighting, and computer systems in the centre, plus the basement is to be renovated so that is can accommodate art exhibits.

“We’re making many improvements, but going slowly, step by step,” Keenan said. There are about seven events planned for the next six month at the centre, with tickets to be sold individually or on a season subscription basis.

Keenan emphasized that the underlying rationale for creating and improving the Bradford Arts Centre is based in religion. The Bradford area is home to a diverse population, he said, in terms of ethnicity and income levels of its residents.

“In engaging in this project we are simply living out Jesus’s call to celebrate and nurture the human spirit, in this case, through art,” Keenan said. “We see themselves as followers of Jesus and his teachings.”

He added: “Our members are trying to make the world in which they live whole, by engaging in ministries of healing, as they bring hope to the least, the last and the lost. Our hope is this will break down barriers that keep people from realizing their full potential. We want to make where we live the best it can possibly be.”

For more information on how Bradford United created a vital community hub through the Bradford Arts Centre, contact Keenan at revkeenan@gmail.com.